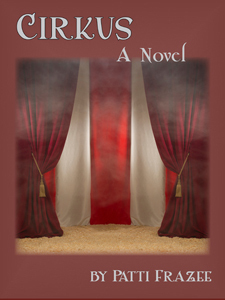 In Patti Frazee's astonishing debut novel, enchantment and illusion casually commingle with reality as the Borefsky Brothers Circus makes its way across the American Midwest in the summer of 1900.

Mariana, the fortune teller, makes herself invisible and drifts through the nighttime circus, listening in on conversations and watching over her beloved Shanghai, a fire-breathing dwarf who closely guards his secrets, even from Mariana's second sight. Conjoined twins Atasha and Anna cling to each other and weep for their home and for their mother and father who sold them to the circus. Jakub, the circus manager and husband to Mariana, fears his wife's gifts, grieves his own failures, and drinks to forget it all. The stories and closely guarded histories of the troupe of performers dance around each other until a love affair between Shanghai and Atasha destroys the delicate balance.

As secrets are revealed and old wounds are opened, the consequences are unbearable to some and liberating to others. Lyrically graceful and populated by vividly drawn characters, Cirkus is a haunting novel of devastating heartbreak and exquisite loveliness.

"For everyone who has ever dreamed about juggling fire, spinning in space, or falling in love with the girl on the flying trapeze."-Judith Katz, author of The Escape Artist and Running Fiercely Toward a High Thin Sound

"The 'freaks' of Cirkus are fully realized, poignantly drawn fictional characters. Conjoined twins Atasha and Anna, in particular, are so intimately portrayed that Frazee herself strikes me as a conjurer, a channeler of separate human experience."-Alison McGhee, Author of Rainlight, Shadow Baby, and Was it Beautiful?

"A feast of words and dreams. Frazee's women are passionate spirits as vivid as those in the best fairytales, and still are real-their experiences a raw truth."-Susan Power, author of Roofwalker and The Grass Dancer

Out of Harmony
...Frazee’s probing work is an ode to the power of the imagination and the ongoing quest for identity. -- Pamela Carter Joern, author of The Floor of the Sky
Cirkus
A feast of words and dreams...
--Susan Power, author of Roofwalker and Grassdancer
Loading…}